Functional languages are not a panacea for multi-processor development. They prevent data sharing by default, and require the developer to think about shared data when it is used. However, development of a scalable, mulit-processor algorithm is still difficult. It requires intimate knowledge of both the problem domain and the development tools.

I’ve been aware of this problem from a young age - sharing. Imagine a large pile of Legos©: 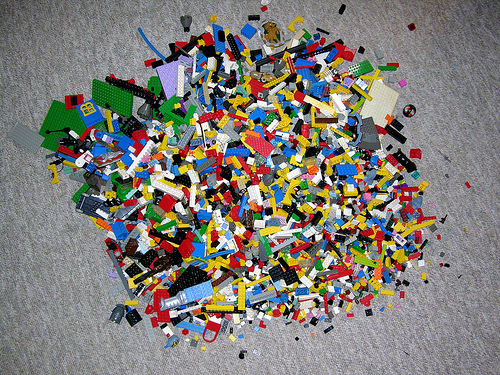 If just one child is playing with these Legos©, we don’t have any problems. Maybe even two or three children could play together here, but what about eight, or ten, or twelve children? Soon, two or more children will want to use the same block. The ensuing contention will slow down the entire building process.

Implementation of an algorithm which scales to multiple processors faces the same problem. If any data (Legos©) are shared among the processors, the contention will cause the program to take longer to complete. As more processors become involved, some capability of each processor will be wasted, waiting for shared data.

In most imperative languages, data is shared between threads by default, often making data sharing difficult to find and eliminate. In functional languages data is not shared by default, giving the promise of writing scalable algorithms with less difficulty.

I attempted to implement a CPU-bound algorithm in both C++ (imperative language) and Clojure (functional language). My goal was to compare the scalability of both algorithms using shared-memory parallelism. I did not attempt to compare wall-clock performance.

I choose to implement an algorithm to categorize all of the two-player Nash games of a given size as I described in a previous post for a few reasons:

I have chosen to use C++ as the imperative language. My implementation depends on the Boost and Intel Threading Building Blocks libraries. The source code is available here.

I have chosen Clojure as the functional language. I am not using any additional libraries. The source code is available here.

The DOS batch file used to run the implementations is available here.

The chart below shows the scalability of the C++ implementation. 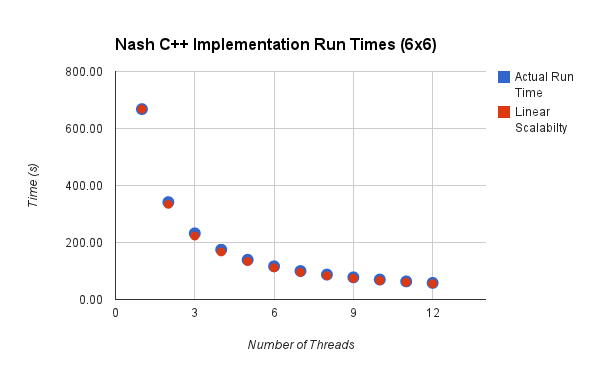 The chart below shows the scalability of the Clojure implementation. 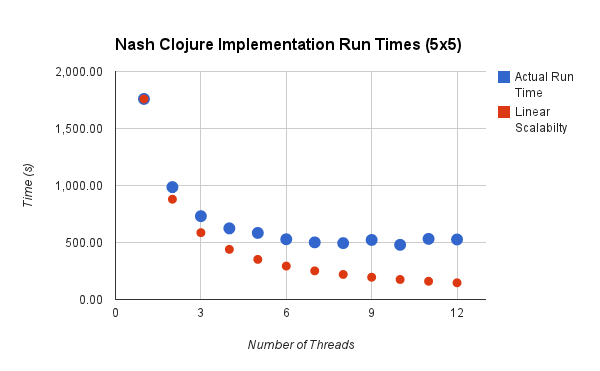 This implementation gets nearly linear scalability for two and three threads, then tails off and fails to improve after six threads, effectively wasting CPU resources for any more than six threads. Since the algorithm requires no data sharing, and the Clojure implementation does not have any shared data, this seems like a surprising result. I believe that I can explain the problem though.

I used Intel VTune Amplifier XE 2013 to profile the performance of each implemenation running with eight threads. The Intel Xeon X5675 processor has 2MB of L2 cache and 12 MB of L3 cache, so the entire address space used by the C++ implementation can fit into the L2 cache. I would expect very few misses for the L2 cache, and almost no misses for the L3 cache with the C++ implementation. Since the Clojure implementation used signifigantly more memory, I expected to see many more cache misses.

Using the profiling guide here, I computed the percent of cache misses using these formulas:

and I obtained the following results:

Suppose that we attempted to fix the Lego© contention described above by separating some of the blocks into groups, and giving each pair of children one group of blocks to use. Most of the blocks could still be in one pile that the children could access, but we’ll have an adult manage that pile, and make sure the only one or two children can takes blocks from it at a time.