One of the most important tools provided by Clojure is the lazy sequence. A sequence of all prime numbers, for example, doesn’t actually store all prime numbers. Instead, it provides each prime number as the client asks, computing the next prime only when necessary. Certain actions in Clojure can limit the ability of the language to be lazy, requiring it to iterate large sequences and store the results in memory.

Here is the section of this code which prevents Clojure’s normal laziness:

In high school, I remember talking with an exchange student from Brazil one day. He was very happy, since he had dreamt in English for the first time the previous night. This was an indication that he was beginning to think in English, instead of translating from English to Portuguese in his mind. This allowed him to think faster.

For the same reason, I often feel that I’m thinking to slowly while writing code in a functional language.

When the code is expressed this way, I can clearly see that it will use a signifigant amount of memory, storing each of the consecutive integers. Instead, it should only store the start and end index of each partition. Here is a better implementation in C++:

The corresponding code in Clojure to return a sequence of only the start and end indices for each partition is this:

I often find that I understand Clojure code when I think about it backwards, using the REPL to unroll the meaning of each statement. Let’s consider this code for a 2x2 game (16 possible games) with partitions of size 4.

This part of the code builds a lazy sequence of the values to iterate. It corresponds to the for loop in the C++ implementation.

Finally, the code conjoins each start index with the corresponding end index by adding the partition size minus one to each start index. The result is a sequence of pairs, with each pair representing the start and end indices of a partition.

The improved Clojure implementation does indeed use less memory, consuming 2.5 GB. However, the memory usage is still significantly higher than the C++ implementation. Did this change improve the scalability of the implementation? 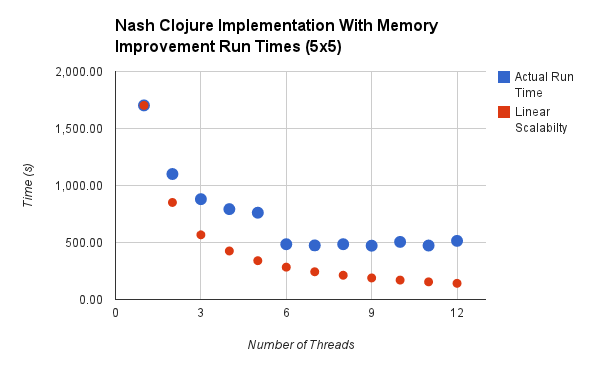 It looks like the scalability is not improved, so the high memory usage is likely still leading to false sharing. 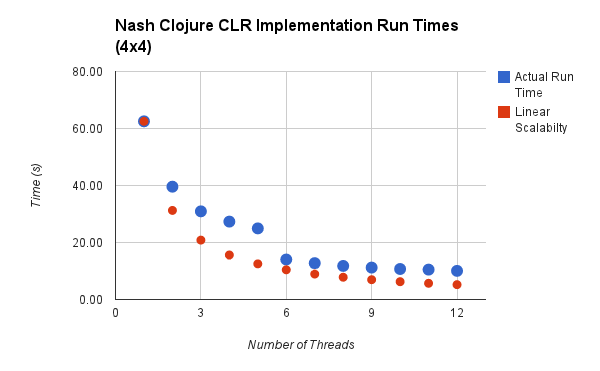 Last time, I surmised that the increased memory usage of the Clojure implementation may have lead to more cache misses than the C++ implementation, which in turn caused the scalability to suffer. I again measured the L2 and L3 cache misses with Intel VTune for the new JVM and CLR implementations. The data obtained are shown below:

Do these cache miss measurements correspond to improved scalability? 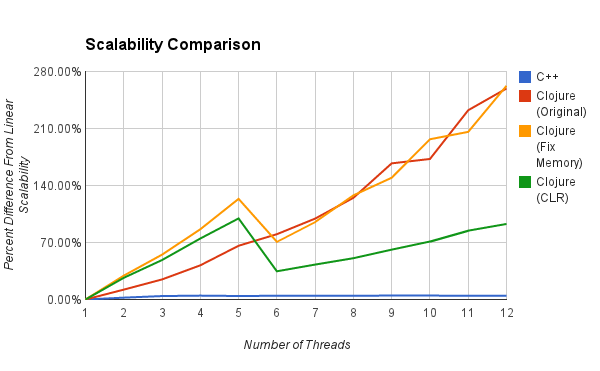 With the lack of actual data sharing, and the small memory footprint of the C++ implementation preventing false sharing, the imperative implementation maintains a consistent error of about 4% worse than linear scalability.

After this analysis, it seems the Clojure may not have been a good candidate to measure the scalability of this algorithm in a functional language. Clojure is a dynamic language, in the same family as Ruby or Python. It removes control of memory usage from the developer by design. Both of the Clojure JVM implementations used much less memory on my laptop (where less memory is available) than on the desktop machine I used for testing. For many applications, this design decision is acceptable and often beneficial. Still, I suspect a more experienced Clojure developer could further improve the memory usage of my implementation, and therefore improve the scalability as well.

More common cases will likely involve algorithms with data sharing, where mutable state can lead to contention in an imperative language. In these cases, functional languages, and features like Clojure’s software transactional memory, will often be beneficial.